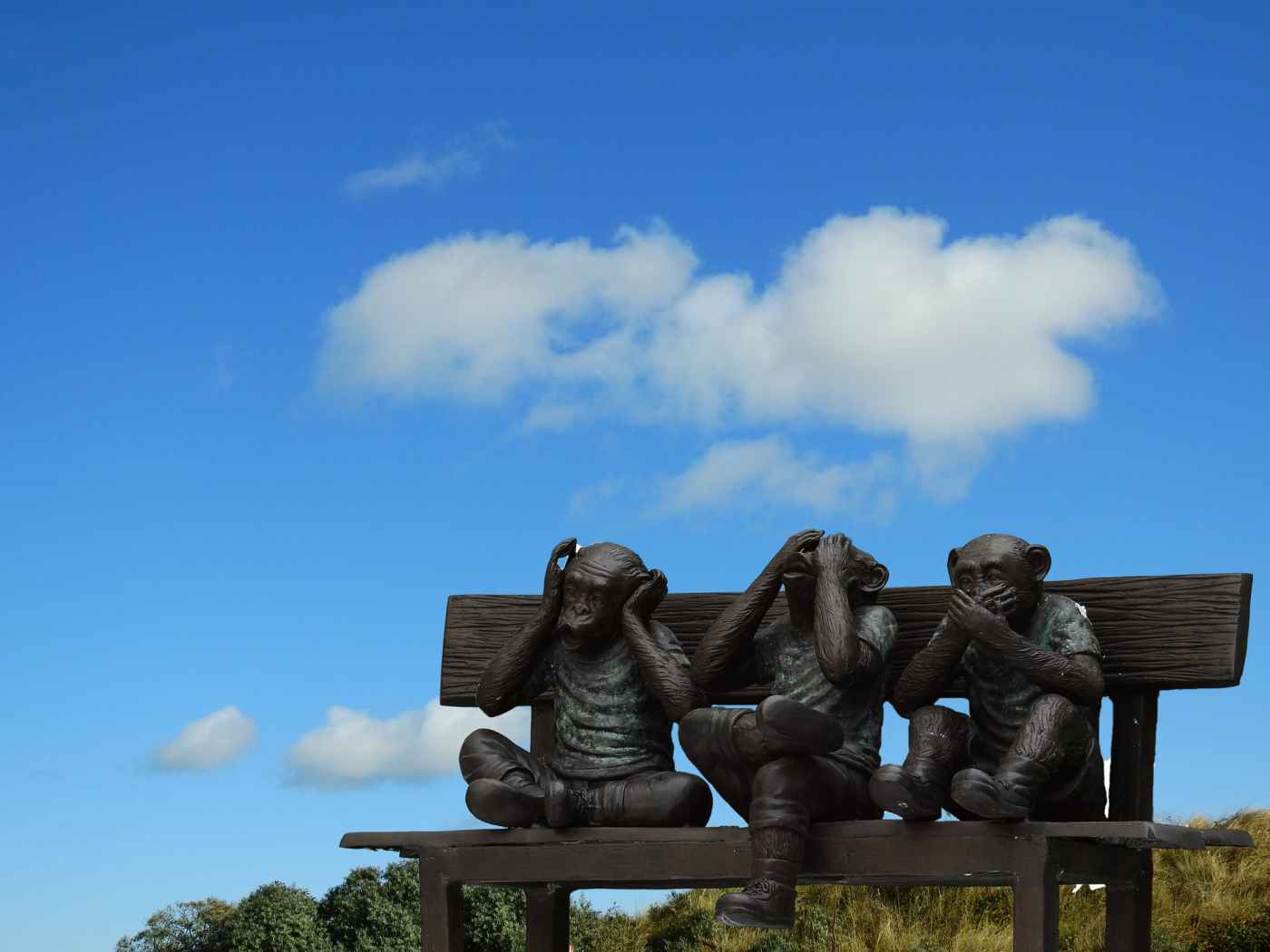 There are certain arguments against veganism that seem to crop up time and time again. If you’re advocating veganism and animal liberation then it’s a good idea to be prepared to defend your views. Here are some of the arguments that I hear over and over and the responses that i typically give;

This is probably the most common argument against veganism, but there is a solid rebuttal; your right to ‘choose’ is completely invalid when it so seriously violates the rights of another being. Yes, we should all have the freedom to live our lives as we choose, but our actions must not infringe upon the rights of other beings. There is a hierarchy of rights and the right-to-life trumps ALL other rights – especially your perceived right to choose to eat animal products. The point is this; if you believe that your choice is all that matters, then you are forgetting that there is a victim in the equation who’s right to live a life free from harm is being neglected. An animal’s desire to live is a strong as yours. Animals are sentient, intelligent creatures with an advanced psychological capacity to experience fear, pain, joy, love and grief and this needs to be taken into consideration when we ‘choose’ how to treat them. If you truly believe that you can ‘choose’ to violate the rights of animals, then who are you to argue or complain if somebody ‘chooses’ to violate your own right to life or freedom from harm? What’s the difference? The premise is the same. Hypothetically, if you condone murder, violence and torture, then you really have no recourse if you become a victim yourself. Wouldn’t that be hypocritical? Who wants to live in a world like that?

2. “Plants have feelings too…”

This is one of those face-palm moments. People are really scraping the barrel when they wheel out this argument. Here’s the thing; plants do not have a central nervous system, nor a brain and therefore cannot feel pain. Pain is the brains interpretation of stimuli and therefore it is entirely subjective. Furthermore, plants are not sentient and they are therefore incapable of being aware of their own existence or of life itself. They cannot experience psychological or emotional trauma, whilst animals definitely can.  I usually see the following retort: “But some plants can move when you touch them, this shows that they have feelings!”. This is a complete misinterpretation – plants only ‘feel’ something in the same way that your smart-phone ‘feels’ something when you touch the screen. That too responds to stimuli. Response to stimuli does not equate to conscious ‘feelings’. Your smartphone can’t feel pain can it? Nope. It’s more appropriate to think of plants as being ‘programmed’ to respond to stimuli like automata. When we are considering the basic rights of a being, we take into consideration their ability to desire to live, their capacity to suffer and their right to self-determination. Plants do not qualify for any of these categories. Of course we must respect mother nature and the finely balanced ecosystems of the planet, but this does not entitle plants to the same rights as sentient beings. Another point to make is that more crops are grown to feed ‘livestock’ than are grown to directly feed the entire human population, so even if by some miracle plants were discovered to have feelings, it would transpire that the meat-eaters are actually contributing to far more suffering than the vegans!

3. “Animals eat other animals, so why cant’ we? It’s just the circle of life…”

Truly carnivorous animals eat meat out of absolute necessity, either due to the limitations of their habitat or the complete inability to digest plant matter at all. It’s a simple case of eat other animals or die. The vast majority of humans are not in this predicament. There is also an important philosophical argument; animals, whilst possessing intelligence, generally act on basic instinct and lack the capacity to understand the ethical implications of their behaviour. As humans, we do have the capacity to understand morals and the ethical implications of our behaviour. We are ‘moral agents’ and almost all of our behaviour is informed by our understanding of morals and ethical consequences. We should therefore strive to act in a way that reduces harm to others. We are an advanced intelligent species and we should act accordingly. For this reason, we should not be using the behaviour of animals as a basis on which to model our own behaviour. Rape is common in the animal kingdom, would you use this as a justification for committing rape? Certain animal species eat their young shortly after birth. Other female species eat their mate shortly after sexual intercourse – will you be adopting this behaviour too because it’s ‘natural’ or ‘the circle of life’? I highly doubt it. In that case your argument falls flat on its face because you aren’t being consistent in your behaviour. Besides all of these ethical arguments, there is also the major fact that we simply don’t NEED to eat meat, dairy or eggs to survive, more on that further down.

4. “If you love animals so much, why are you eating all their food…?!”

The raw statistics blow this argument right out of the water – more crops are grown to feed the animals that are used for meat, eggs and dairy than are consumed by the entire human population directly. So it’s actually YOUR ‘food’ that is consuming the vast majority of plant resources. It is this practice of specifically raising trillions of domestic animals for food that is depriving the wildlife of resources and a habitat to live in. Consider these quotes from globalagriculture.org: “Livestock is the worlds largest user of land resources, with pasture and land dedicated to the production of feed representing almost 90% of the total agricultural land”. Let’s break that down – 90% of ALL agricultural land in the world is used just to accommodate and feed the animals that meat-eaters will eventually consume. That leaves only 10% left to produce plant-based foods that vegans consume. It continues: “The sector uses 3.4 billion hectares for grazing and one-third of global arable land to grow feed crops. 26% of the earths ice-free terrestrial surface is used for grazing”. If animal agriculture ended immediately we could return this land to natural, wild habitats that could sustain the planets wildlife. More statistics: “Nearly 60% of the world’s agricultural land is used for beef production, yet beef accounts for less than 2% of the calories that are consumed throughout the world. Beef makes up 24% of the worlds meat consumption, yet requires 30 million square kilometres of land to produce”. This is a grossly inefficient use of land and resources that is negatively impacting wildlife by destroying their natural habitats and consuming resources that they need to survive and thrive. The bottom line is this; it is animal agriculture that is depriving the world of food by monopolizing land and resources. Veganism is the antidote to this.

This is absolutely false. With the exception of Vitamin B12, every single nutrient we need to survive can be obtained in abundance from plant-based foods. Protein and Calcium are the usual culprits that are cited in reference to this argument. Let’s take a look at protein first; Every.Single.Plant.Contains.Protein! On average Chicken and Beef contain roughly 18g of protein per 100g. By direct comparison Spirulina contains 57g, Red Rice contains 39g, Peanuts contain 25g and Kidney Beans contain 21g. Other excellent sources of protein include Lentils, Soy, Chickpeas, Chia Seeds, Broccoli, Quinoa, Tofu, Almonds, Hemp Seeds etc. The list goes on and on. Calcium is equally abundant in plant based foods. In fact, plant-based sources of Calcium are MUCH more reliable than dairy sources due to dairy’s acidity when digested, which results in a loss of calcium from the bones. See my previous post for a full explanation. Calcium rich foods include; Tofu, Spinach, Black-Eyed Peas, Okra, Almond Milk, Oranges, Collard Greens & Chia Seeds. Aside from the nutritional aspect, let’s also consider the human physiology; The human body is generally set-up best for consuming plants, NOT meat and dairy. Human teeth are relatively flat and our method of chewing via a grinding, side-to-side motion is really geared towards breaking down tough plant-matter. By comparison, a true carnivore has MASSIVE, sharp canine teeth designed for ripping hide-covered flesh straight from a dead animal and pretty much swallowing without any chewing. I’d like to see you try that. Then there’s the digestive tract – A carnivore’s digestive tract is short, which allows meat to pass quickly through their body (who wants rotting corpse flesh hanging around in their body for long?) By comparison, herbivore digestive tracts are much longer, designed to allow the body to break down fibrous plant matter and absorb as much of the nutrients as possible. Carnivores also have extremely strong stomach acid which is able to break down tough flesh and kill any harmful bacteria that may be lurking. By comparison, a human stomach is set up more like a natural herbivore, with weaker acid for digesting pre-chewed food. This acid is too weak to kill certain bacteria and that’s why humans are so susceptible to food poisoning (source: peta.org) Did you ever hear of a lion getting food poisoning?

“The most dangerous phrase in the human language is ‘we’ve always done it this way” – so goes the quote. The point is this; blindly following tradition is a dangerous path to go down. It allows various behaviours to go unchecked and unchallenged. If we all ignorantly followed in the paths of our ancestors then we would never evolve culturally, technologically or ethically. Society would stagnate and we would still probably be stuck in the stone-age. There are a multitude of behaviours that have been exhibited since time began; slavery, rape, murder, torture, theft, racism. Just because they have a long history does not make them right. Tradition is an ignorant, pathetic excuse for the continuation of animal abuse and exploitation. Times change and we become wise to the ill effects and ethical implications of our behaviour. The more enlightened citizens of the USA in the 19th century came to their senses and realised that slavery was unjust, unethical and downright cruel. They fought for change and slavery was eventually abolished. Many slave owners fielded the same arguments back then – “this is always how we’ve got things done”. They too believed that certain beings were below them and didn’t deserve equal consideration of their basic rights and freedoms. Times change. Justice prevails. Get on the right side of history.

Are there any other arguments that really irritate you? How do you respond? Leave your comments below!